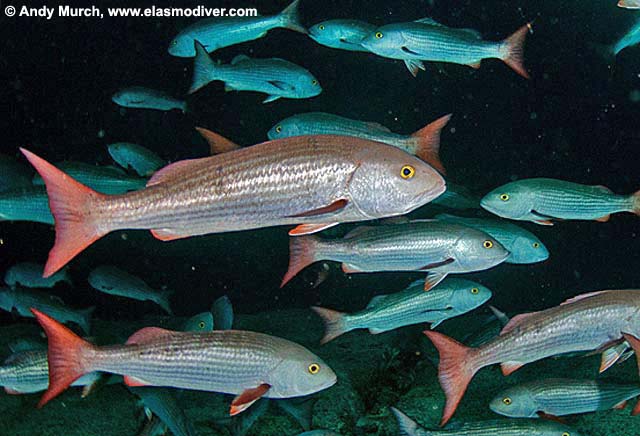 Lutjanids vary in size from small to large (to 1.7 m), and in shape from ovate to elongate; the body is moderately compressed; top jaw moderately protrusible, slips under cheek bone for most of its length when mouth is closed; jaws with distinct canines, but no incisors and rarely molars; front and sides of roof of mouth usually with small conical teeth; no enlarged pores on chin; preoperculum serrated; one continuous dorsal fin  X, 8-18, that may be notched between the spiny and soft parts, sometimes with deep notches between the spines; anal fin III, 7-11; tail fin with a straight to deeply forked edge; scales rough, moderate sized; body, cheek and operculum scaly; snout, below eye and lower jaw scale-less; pelvic axillary scale process usually well-developed; lateral line complete.

Most snappers dwell in shallow to intermediate depths (to 100 m) in the vicinity of reefs, although there are some species largely confined to depths between 100 and 500 m. Snappers are active predators feeding mainly at night on a variety of items, but fishes are dominant in the diet of most species. Other common foods include crabs, shrimps, various other crustaceans, gastropods, cephalopods, and planktonic organisms, particularly urochordates. The maximum lifespan of snappers has been estimated between four and 21 years based on studies of growth rings on bony structures such as otoliths and vertebrae. In general the larger snappers have longer lifespans, perhaps in the range of 15-20 years. Snappers are good eating and are frequently offered at markets and restaurants.

The approximately 108 members of the 17 genera in the family are distributed in all tropical seas, but the majority inhabits the Indo-Pacific. The genus Lutjanus is the largest containing 67 species, including nine eastern Pacific representatives. In our region there are 12 species in four genera, including two Indo-Pacific species and 10 endemics.