This website, and the mobile app derived from it, contains more than 13,000 images. Over 500 citizen-scientists have contributed almost 45% of those images, of live fish in their natural habitat. Those images have made this a much more valuable resource as they show fish in their best light, show how similar closely related species can be, and show how individuals of a single species often vary in color and form depending on their life stage (e.g. juveniles, females, males), and what habitat they are living in. Some also show how colors of a single individual fish vary in relation to its moods and behavior.

Some citizen-scientist underwater photographers have taken a particularly enthusiastic interest in supporting this website and provided many of the beautiful and informative images that are included. Below are a group of people who have made major contributions through providing 100 or more images. The authors and the Smithsonian are extremely grateful for their support. 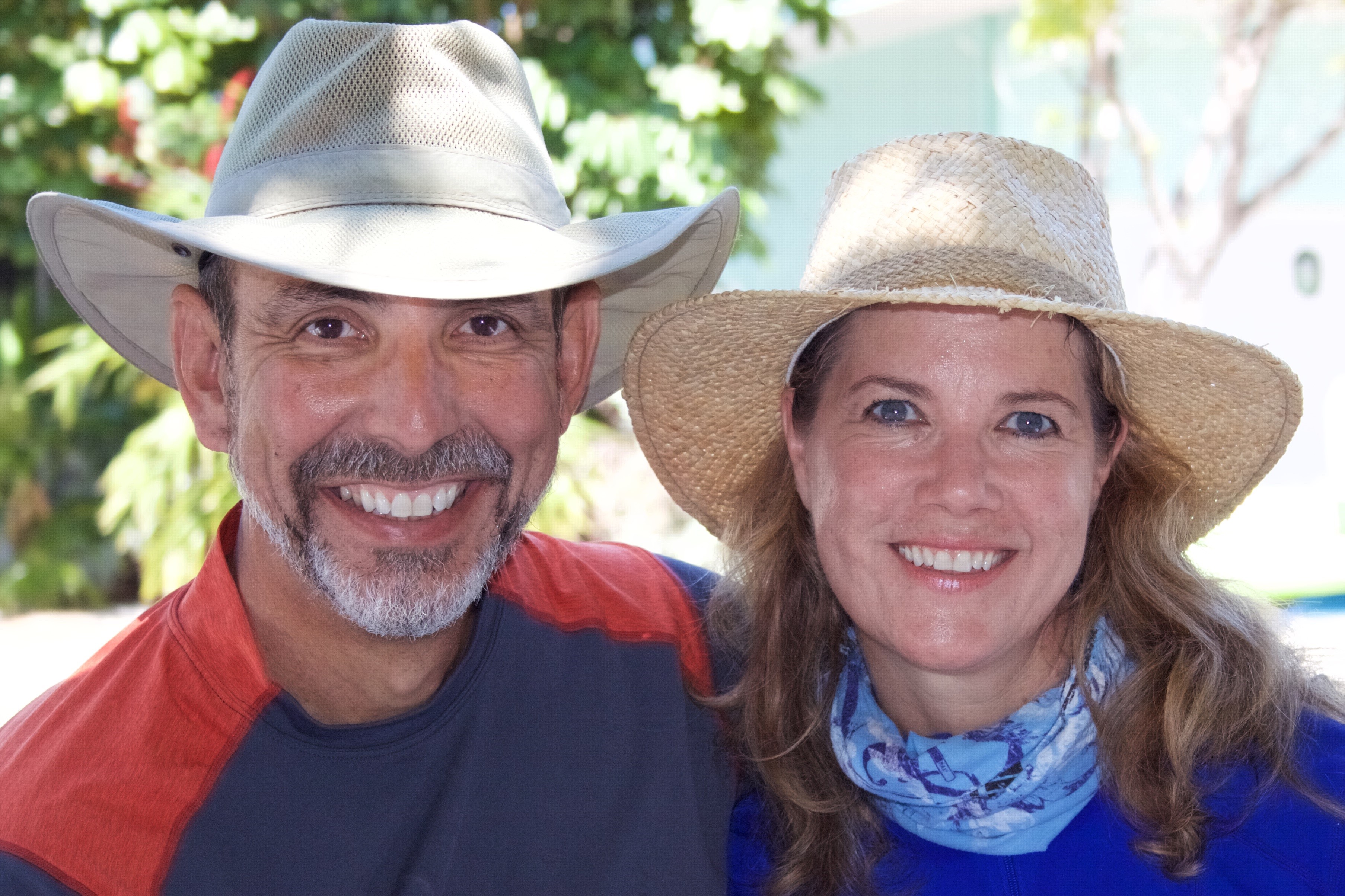 Carlos & Allison Estape are passionate about diving, underwater photography, fish ID and marine research. Allison became a certified diver at the age of fifteen, Carlos at eighteen (late bloomer) and both have logged thousands of dives around the world. They are underwater photographers whose images have been featured in scientific publications, books, magazines, aquariums, museums, hotels, private collections and used as templates for tattoos! They are proud to be contributors to the Smithsonian Tropical Research Institute’s Fishes: Greater Caribbean website and app. They are citizen scientists who co-authored The fishes of Alligator Reef and environs in the Florida Keys: a half-century update, and work with REEF.org and marine scientists in the Tropical Western Atlantic. They are featured speakers and teachers on fish behavior and ID who created 100fishid.com to help others learn how to identify fish. Carlos was born in Cuba in 1960 and moved to Miami as a child. Allison was born in 1965 in the USA and grew up in Panama and Alabama. www.carlosestape.photoshelter.com 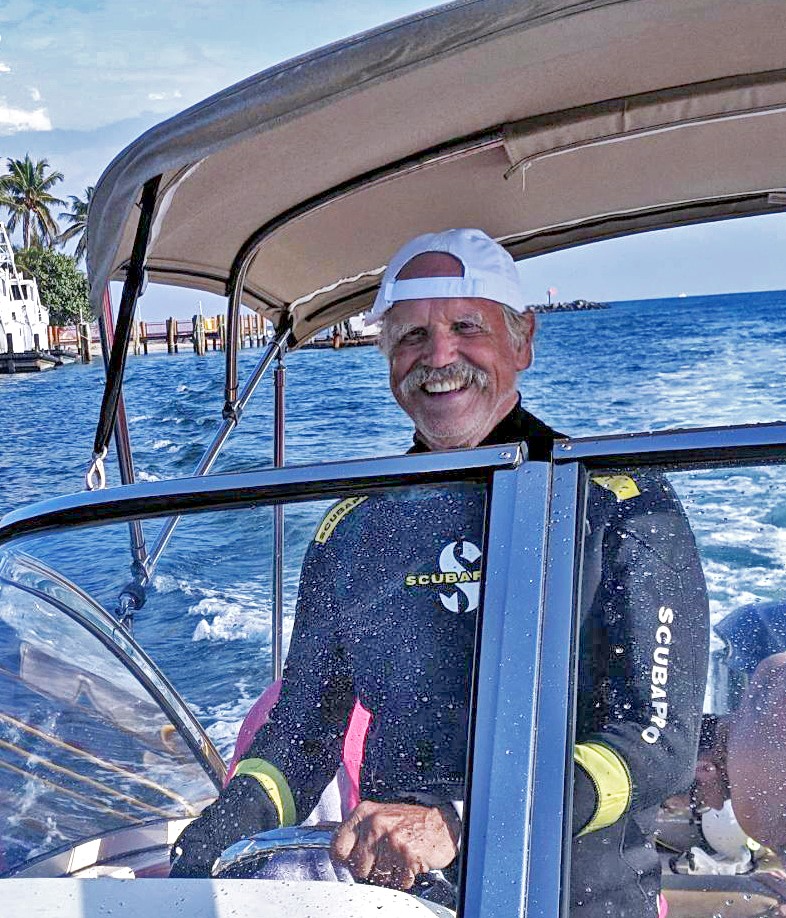 I’ve always loved pretty colored critters. Once I learned that they are concentrated on coral reefs when I began to dive, I just *had* to try photographing them. Inadequate equipment, limited shots available per dive with the rolls of film, and the long delay between taking the shots and getting to see how they turned out, led to my giving up on the underwater photography hobby several times. When digital came along, things totally changed for me, but other life changes put a crimp on the number of liveaboard dive trips that I could continue to get away with. For about the past nine years I’ve been driving from Savannah to South Florida for long weekend shore diving trips, staying in ratty motels. With a large tank and the shallow depths of shore diving, the strobe batteries become the limiting factor for the number of photos I could take home with me to play with on the computer until the next drive down. As a hoarder, this was nearly the best of all worlds. Flickr lets me post as many pictures as I like. Post-processing is therapeutic. Somewhere along the way, the folks at the Smithsonian ran across some of them, and apparently found some of them adequate for reef fish ID. Have now recently retired from the practice of dentistry and moved to South Florida – on the beach – where wonderful shore diving is 50 yards away. I hope there’s enough room on the internet for all the pics I’ll be taking. The other folks listed here as citizen-scientist photographers are my heroes. I haven’t met any of them in person, but have gotten to know them a bit online. They are all out of my league. It’s a huge honor for me to be taken seriously by the Smithsonian. Kevin Bryant, March 28, 2019; email: mntlblok@att.net 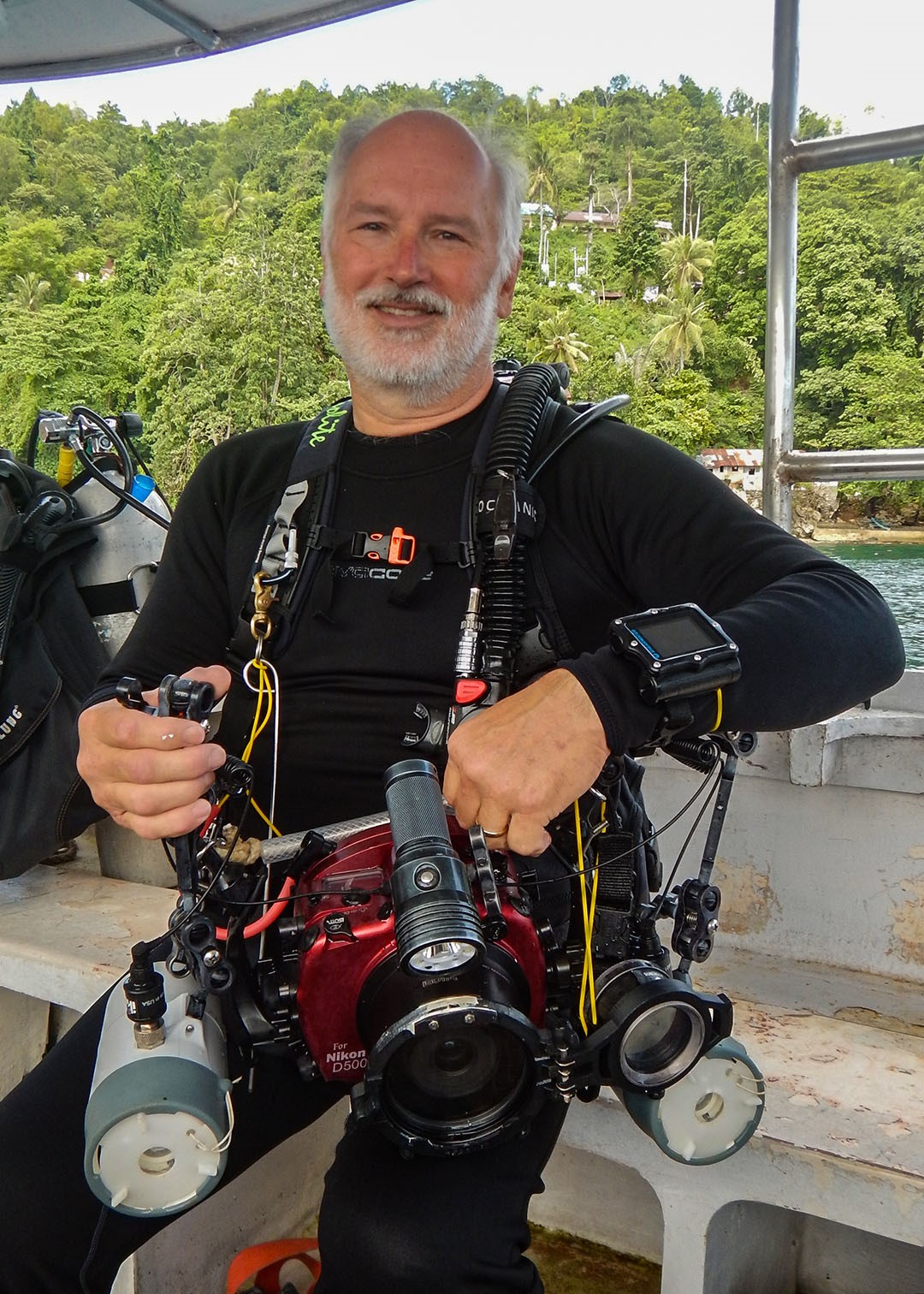 A Midwest USA diver at heart, Frank logged his first dive in 1969 on the Lake Erie wreck North Carolina. Along with many years diving in the Great Lakes region, Frank’s travels have taken him north and south along both North American coasts and throughout the Caribbean and Bahamas. Since retiring in 2009, his dive travels have taken him to more exotic locations including Indonesia, the Philippines, and the Solomon Islands. Frank was a YMCA and NAUI instructor for over 20 years and has logged nearly 3,000 dives. Retirement allowed time to volunteer at the NC Aquarium at Pine Knoll Shores as a touch-tank interpreter and member of the dive team. As part of the dive team, he gave presentations from inside the tank and developed a keen interest in species identification in order to respond to guest questions. Frank attended the inaugural REEF South Atlantic States Fish and Invertebrate Identification class that was hosted at the aquarium and he was hooked. An avid photographer since his early days in diving, Frank turned his attention specifically to fish photography, using the photos to increase his ability to identify fish both in the SAS and Tropical Western Atlantic regions. He is currently a level 4 REEF surveyor in both SAS and TWA regions and regularly teaches REEF Fish ID classes from his home base in North Carolina. Over the years Frank has presented at numerous dive shows and dive club events in the Midwest and North Carolina. His photos appear in several marine life identification books, apps, and online sites as well as in several scientific papers. 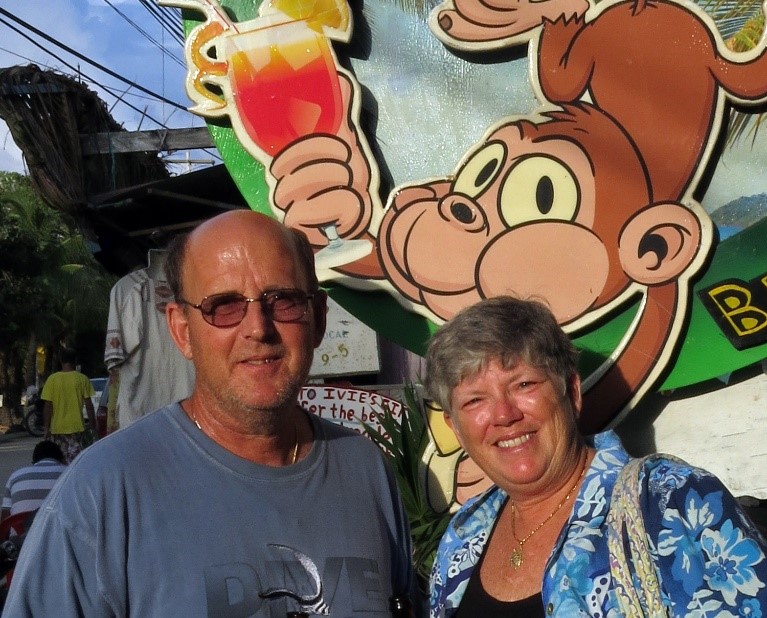 Carol and Bob Cox fell in love with diving while stationed at Anderson Air Force Base on Guam in 1991. It wasn’t long before they started doing underwater photography and videography. Both have logged thousands of dives around the world, but their real passion is running an artificial reef program for the Mexico Beach Artificial Reef Association (www.MBARA.org). Their favorite duty is surveying the artificial reefs off the shores of Mexico Beach, Florida. Along with checking on the condition of the reefs, Carol and Bob catalogue the marine life attracted to the various reefs. Their marine photos have been featured in scientific publications, books, magazines, and aquariums. They are proud contributors to two Smithsonian Tropical Research Institute websites and apps: Fishes: Greater Caribbean and Fishes: Tropical Eastern Pacific. Along with Mary K. Wicksten, Carol co-authored Invertebrates associated with gorgonians in the northern Gulf of Mexico. She also teaches online classes on fishes of the northern Gulf of Mexico with REEF.org. Bob and Carol retired from the Air Force in 2007 and 2009 and settled in Mexico Beach, Florida. 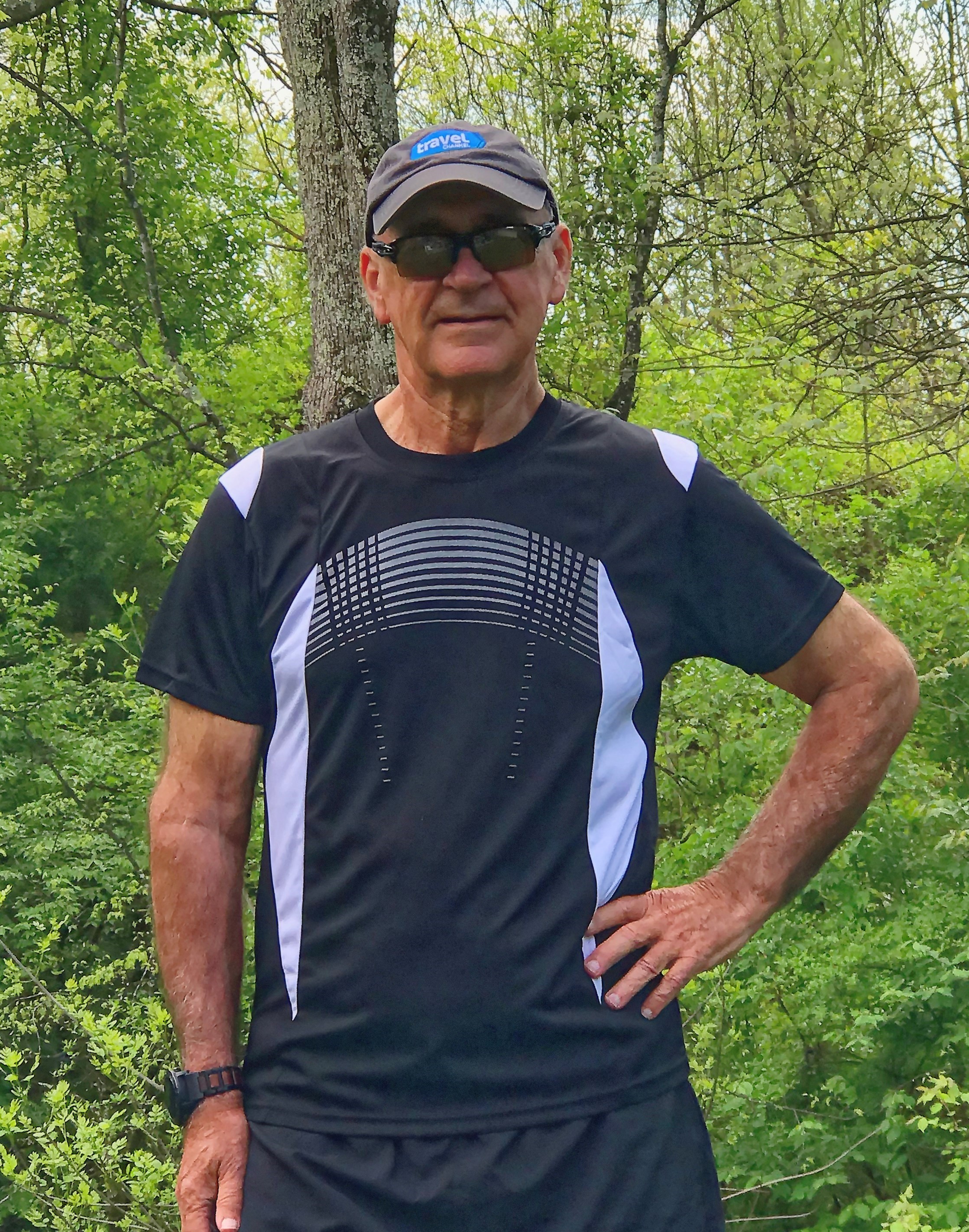 Jim Garin learned photography in the 60's, from Minor White (with darkroom from Ansel Adams), and started diving in 1967. He was a NAUI instructor in 1975. His first underwater camera was a Nikonos, then he later used a Spotmatic with Honeywell strobes and then gradually moved from film to digital, producing several 100,000 images. Subsequently some of his images have been used in several fish ID books. He has been diving all over the world, but learned best in Destin, Florida and Panama. 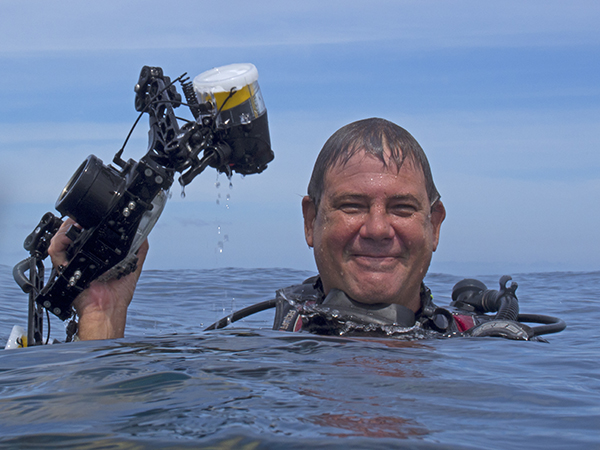 Mickey has been diving for over 30 years, most of that time professionally, first as an instructor then as a divemaster on the island of Roatan, Honduras. One day Mickey first borrowed a friend's digital camera, and he was hooked. He began shooting a "species library" of the local reef inhabitants. He jokingly vowed that when he had collected 1000 species photos, he would publish a book. In late 2011 he hit his mark, and began assembling and organizing his photos into the work that would eventually become "Caribbean Reef Life - A Field Guide for Divers". Today, the total species count is just over 1500 and still growing. The book is now into it's sixth printing, as an expanded third edition. Mickey is still seeing new things on every dive. His website is www.caribbeanreeflife.com 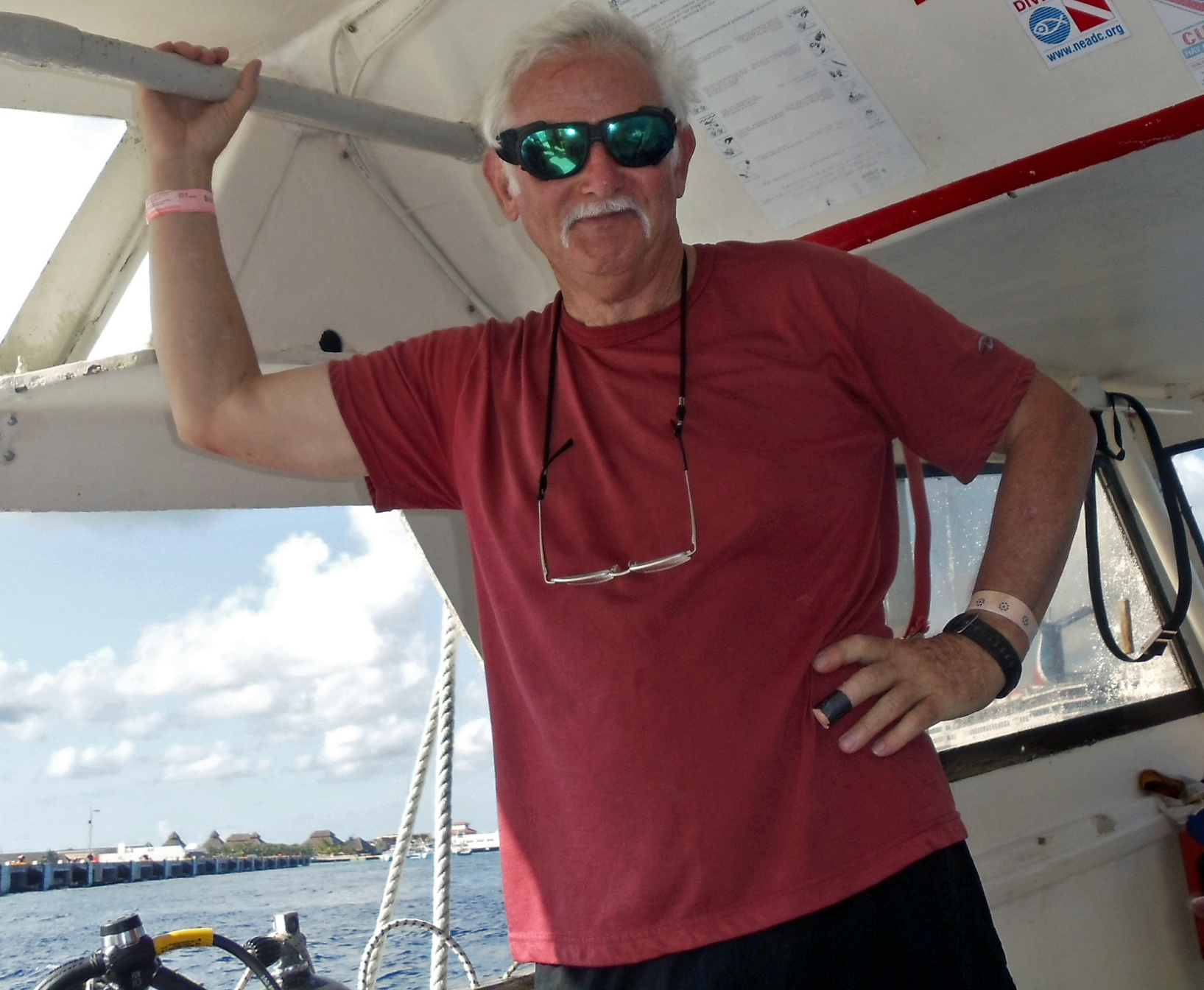 Growing up on a small family farm in the North Carolina foothills, Richard was always fascinated by the natural world. He became scuba certified in 1971 while attending graduate school in Inorganic and Nuclear Chemistry at Florida State University. After working in the utility industry for most of his career, he retired and began part time consulting in 2009 (https://www.linkedin.com/in/richard-eaker-4b8ba244/) and moved to Palm Coast, FL in 2015. He began attempting to take underwater pictures in the late 1990s using a borrowed Nikonos 5 system. Two camera floods and 24-36 shots/dive resulted in few pictures before 2006 when he purchased his first digital camera and found that having the ability to store unlimited pictures fit his camera technique well. Having been born without a culling gene, his older son’s gift of a Flickr site in 2007 fit with his attempts to over-edit and save far too many pictures (https://www.flickr.com/photos/8459071@N08/albums). As his consulting time has become reduced, he has also found time to volunteer at Marineland discussing marine species with guests and conducting tours for school field trips. While he enjoys diving anywhere and hopes to get the opportunity to dive some new/different locations, he has found the Florida southeast coast to be quite interesting.